A Semi-Secret Garden in Queens 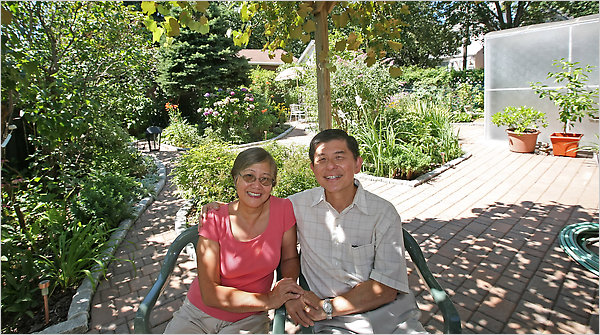 SINCE 1945, a red brick house with a peaked roof has sat on 77th Avenue near 162nd Street in Hillcrest, Queens, and according to local lore, every fall the arbor in the backyard has yielded a bumper crop of plump crimson grapes.

Pale green now, by autumn the grapes will be ready to burst. Then Kim Eng Yeo, a watercolorist who lives here with her husband, Bock Cheng Yeo, will turn them into jam and juice.

Nor is the grape arbor the backyardís only attraction. This lushly planted expanse, which is largely hidden from the street, is home to so many flowering plants and shrubs that when Ms. Yeo reels off their names, she sounds as if she is reciting the contents of a particularly well-equipped botanical garden.

"Here's the mock orange, and the weigela, and the old-fashioned lilacs - three kinds, lavender, white and deep purple," she said as she made her way along the curvy brick walkways. "Here are the mini-roses, the hydrangeas, the day lilies, the tiger lilies." She lingered near the patch of lavender, from which she harvests the seeds to make sachets for gifts and cupboards. Later in the summer she will offer guests juice made from the fruit of the calamondin, a tree popular in Southeast Asia.

The Yeos, who are 63 and have been married for 41 years, were born and raised in Singapore. Until his retirement in 2001, Mr. Yeo was a career officer with the United Nations, and in 1978, after a decade in Thailand, the couple moved to New York when Mr. Yeo was transferred to the organization's headquarters. In 1983 they bought this two-story house for $82,000, and here they raised two daughters, now grown.

Ms. Yeo prizes her green wonderland not simply because it provides food, serenity and the intoxicatingly fragrant sachets. Her garden, which she spends at least two hours a day tending, is also her muse. Ms. Yeo became a serious watercolorist in the 1970s, and for nearly three decades, this backyard has provided inspiration. Especially early on, she used to sketch and paint outside, or take blossoms into her basement studio.

Inside the house her work is everywhere. Above the living room sofa hangs a large watercolor titled ìFish in Lily Pond No. 2î in which golden koi swim amid a tangle of dying lotus blossoms. On the dining room walls hang images of magenta tulips, captured just as their petals are about to fall, along with violet-blue irises, both inspired by plants from her garden. Elsewhere are impressionistic depictions of orange roses and the passion flowers that grow wild in Singapore. Ms. Yeo remembers eating their little fruits as a child.

Ms. Yeo, who had started painting in Thailand, resumed her career when she arrived in Queens. Her work has been exhibited locally and in Singapore; it has even been reproduced on Unicef greeting cards.

Although the couple have lived in New York for more than three decades, their roots in Southeast Asia remain strong, and nowhere are the ties more vivid than in the wedding photographs of their respective parents that hang in their living room.

When Ms. Yeo's parents were married, her mother was just 15, and the face that peers out from the picture is that of a solemn child. Both husband and wife were dressed in ceremonial wedding garb, and the embroidered slippers shot with silver thread that they wore that day are framed and hang below their portrait. Mr. Yeoís parents, more modern, were attired in Western clothing; she in a striped outfit and he in black and white dress shoes.

The couple's ties to Southeast Asia are evident, too, in their collection of pottery, displayed in a pair of cabinets in the living room. The contents include blue and white china acquired from salvaged wrecks of sunken pirate ships, along with dishes bearing hand-painted images of crabs and shrimp, of butterflies and swallows, and of grasshoppers and dragonflies that might have flown in from the garden. There are snuff bottles, nesting bowls, tea caddies, ginger jars. Every piece has a story and many have a past.

For many years Mr. Yeo played competitive chess, and his small army of silver trophies occupies an entire shelf in their bedroom. He is also the familyís official photographer, the one who has preserved images of his wife's creations and who attends to, as he puts it, "all her photographic needs."

On Ms. Yeo's dresser sit lacquered music boxes that her husband has bought her over the years. Some of them play Japanese music, although the one that opened to reveal a tiny ballerina, now long gone, plays that music-box chestnut, "Around the World in 80 Days."

The couple also collect antique books. When Mr. Yeo was young, one of his favorite poems was Coleridge's "Rime of the Ancient Mariner," and he counts himself fortunate to possess a copy of an early American edition of the poem, an oversized volume dating from 1878, complete with original etchings by Gustave Doré.

The house retains many of its mid-century architectural elements, among them the vaulted ceiling in the living room and the arched doorways. The spacious finished basement serves as Ms. Yeo's studio and is also where she teaches students and stores her art books.

But without question the outdoor space is the couple's jewel. Along with all the plants that Ms. Yeo ticked off on her little tour, the garden is planted with phlox, evening primroses, Siberian irises, columbines, gladiolas, hibiscus, anemones ó names people remember from the gardens of their childhood, the ones tended by their mothers and grandmothers. Plantings include species with lovely and evocative names like lambsí ear and hen and chicks. A small cement statue of Hebe, cupbearer to the gods, is among several sculptures that keep watch over the greenery.

The garden is also home to trees the couple has grown from seed, among them a lemon, an avocado and a pineapple; all sit in pots for easy transport inside during cold weather. Other foodstuffs are provided via trees bearing nectarines, persimmons and figs, along with blueberry and raspberry bushes and cherry tomato plants. So many delicious things grow here, the couple could practically live off the bounty.

Come late summer, orange and black monarchs will swarm the butterfly bush. Come autumn, the pale blossoms of flowering fall clematis will climb the fence that surrounds the property.

"Each season will have its own palette," Ms. Yeo said, "its own colors and fragrances. And because so many of the flowers are perennials, they will return year after year after year."